Boskone brings you thee new Mini Interviews to help us get through the mid-week blues. Today, the skeletons are coming out of the closet with Toni Kelner, we get interstellar with Allen Steele, and Jon Hunt gets artsy!


Toni L.P. Kelner has published eleven mystery novels, twenty-something short stories, and five anthologies (co-edited with Charlaine Harris). Starting in September, she’ll be a split personality–she’ll edit anthologies as herself but will be writing the Family Skeleton mysteries under the pen name Leigh Perry. Find more information by visiting Toni on her website, follow her on Twitter @Family_Skeleton, and friend her on Facebook.

Toni Kelner (TK): Honestly, my favorite part is hanging in the bar, and I don’t even drink that much! It’s all about talking with the fascinating folks who come to Boskone. Not that I don’t adore the panels, and the art show, and the dealer’s hall, and all that good stuff, but the best part is meeting new people and talking to old friends.

(TK): This year, I’m particularly looking forward to catching up with Melissa Marr.

(TK): I’m working on the third novel in my Family Skeleton series (written as Leigh Perry). The biggest challenge is that it is the third. You see, I think a lot of people picked up the first and maybe even the second because they were intrigued and/or amused by one of my main characters, Sid the Skeleton. That’s not a nickname. Sid is actually a skeleton. So that’s quirky enough in the world of cozy mysteries to get people’s attention. Now I need to prove that Sid is more than just a gimmick, and make sure I’ve got the plot to keep people reading. And of course, I need to flesh out Sid’s character. (Har!)

(TK): So many! In movies and TV, the second Avengers movie, the second Guardians of the Galaxy movie, the Doctor Who Christmas special, the next episodes of Sherlock! In books, the next from Seanan McGuire, Illona Andrews, Charlaine Harris, and Jim Butcher. In comics, Saga and Fables. I’m a well-rounded geek.

(TK): Well, it didn’t exist then, but if they had, the Harry Potter books. The story-telling and characters are something I would have loved back then. I adored them as an adult, too, but I think they would have meant a lot more to me back then. 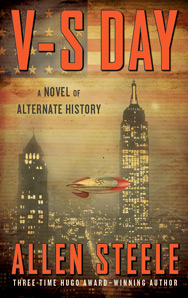 Allen Steele has published nineteen novels and nearly a hundred works of short fiction. His work has received numerous awards, including three Hugos, and has been translated and reprinted worldwide. In 2013 he received the Robert A. Heinlein Award. His most recent novel is _V-S Day_. He lives in western Massachusetts with his wife and dogs. He doesn’t like potato chips and he can’t take torts. For more information, visit Allen on his website.

Allen Steele (AS): Seeing old friends and making new ones.

(AS): The novel I just finished, Arkwright, is a very realistic look at interstellar exploration. It involves the descendents of a famous science fiction writer of the 20th century and their efforts, over the course of many years, to use his fortune to build the first starship and send it to a distant world. The biggest challenge was designing a vessel that had as little “wish-fulfillment” technology as possible while still projecting forward to the late 21st century.

(AS): Generally speaking, I write a traditional form of science fiction that’s solidly based on science and technology while also dealing with mature issues.

I make art in both traditional + digital media for book jackets, storyboards + concept art, collectible card games, role playing manuals, music videos, + magazines. I write a bi-monthly column on illustration + creativity for Art Hive magazine. I am the art director for Frombie where I work with a talented group of young artists designing collectible toys, comics, pins, posters + more. In addition to working for freelance clients, I have developed my own line of creepy character pins called EEPz. I also teach drawing, painting + illustration at the college level. I am from the North East, but currently live in South Florida with my wife + two kids. For more information visit Jon at his website, on Facebook, and on Instagram.

Jon Hunt (JH): I really enjoy the atmosphere of Boskone. Since I am an illustrator, the Art Show is definitely a focal point for me. I can always count on being humbled by a diverse and inspiring selection of paintings and prints by some of the most talented and influential artists working in the genre. Boskone is also one of the most laid back and conversation-friendly conventions I have ever attended. I look forward to catching up with friends as well as networking with artists, art directors, editors and fans.

(JH): Discovering Science Fiction and Fantasy literature and films was a huge defining moment for me. Reading did not seem all that interesting until I discovered books about spaceships, robots, monsters and dragons! Madeline L’Engle, Robert Heinlein, Edgar Rice Burroughs H.P. Lovecraft and Anne McCaffrey, Batman, Watchmen, X-Men, Star Wars, Alien, Bladerunner, Evil Dead… These are just a few of the genre authors, films and comics have influenced my early style and also inspired me to create fantastical art in the first place!

(JH): I am working on a variety of exciting projects right now. I was honored this past year to illustrate the cover for the Romanian edition of Fahrenheit 451 by Ray Bradbury. I have also been illustrating, writing and art directing for a collectible toy and pin company called Frombie (www.frombies.com). My association with Frombie inspired me to create my own line of collectible pins and comics called EEPz (creepyeepz.com) which I debuted at New York Comic-Con in October 2015.

Our next set of Mini Interviews is coming soon! Sign up to follow the Boskone Blog via email to avoid missing the interview with your favorite author. You can also get more information on the Official Boskone website and by friending us on Facebook. If you’re on Twitter, follow us @boskonenews and look for us using #Boskone.