The Boskone Guest Interview Series concludes with our Official Artist Richard Anderson. In most cases, it’s fairly unusual for a convention to feature a concept artist as a guest. However, Boskone is known for its art program and Art Show, and we are constantly striving to bring in exciting, talented artists like Richard–who you should definitely get to know. Not only is he a talented and creative artist, but he’s an incredibly nice guy. We are excited to bring him to Boskone this year.

We hope you enjoy the last of our Guest interviews. Please be sure to stop by and say hello to Richard and all of our Guests at Boskone in Feburary! 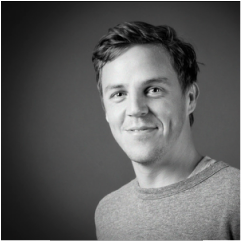 He started out by moving from Montana in 2000 to go to school at the Art Institute of Seattle and graduated in 2002 with a associates of applied arts in animation. He started my first job at Arena Net on the first Guildwars game in 2003, where he worked for the next 8 years. In 2011, Richard was given a opportunity to move to London and work at the effects house MPC on a few projects including Ridley Scott’s Promethius and Sherlock Holmes: A Game of Shadows. Richard then moved to the art department at Framestore in 2012 where he worked on Thor: The Dark World, Guardians of the Galaxy, and Edge of Tomorrow. In 2013, he was given the opportunity to go back to games, working for Rocksteady Studios on the Arkham Knight, where he works today. Visit Richard online at http://www.flaptrapsart.com

For people who are unsure of what the term means, how would you describe your work as a concept artist? Also, how do you go about developing your ideas for a new project?

Good question, I always have to re-explain kinda what I do to my dad quite a bit (with a smile). The role of a concept artist is really to solve visual problems, and to inspire the people working on the team. Bringing a lot of creative in a more visual sense. Ideas are developed for new projects by meetings and discussions with other members on the team. Usually we will produce a guide line and reference panels to run the idea off of.

When did you realize that you wanted to be an artist? Once you realized that art was your passion, what steps did you take to pursue or prepare yourself for a career in art?

Like all children, I enjoyed creating and drawing, and I feel like I had a natural passion for it, rather than talent. It also helps when people believe that you should be an artist and help drive you in that direction. I went to art school in Seattle, since it was the closest city to were I grew up in Montana, started animation school and surrounded myself with like minded artist who worked hard and helped to push each other to grow and learn more. I didn’t know at the time that you could be a concept artist. Once I researched more, I knew I wasn’t good enough to start out that way. So, I studied 3D modeling and texturing and got a job in the industry painting ground textures and modeling rocks. It was great, and it got me into the industry. About 5 years later, I was put into a full-time concept position.

What has been your favorite art project so far? What was it? What did you love about it?

My favorites have be Guildwars. It was my first. With the guys I worked with and my art director, we had a blast and learned a ton. Plus, it was a really fun game, good memories. Another one would be a few of the book trilogies I’ve been able to work on (always a goal to work on book covers), including, the Orbit series, Books of the Shaper by John R. Fultz and art directed by Lauren Panepinto, and also The Dinosaur Lords series I’ve been working on by Victor Milan and art directed by Irene Gallo for Tor publishing. Anytime you get someone like George R.R. Martin to say “what a cool cover,” it kinda goes into your favorites. Ha! Last would be Guardians of the Galaxy. It was a dream to work on movies and this was a great learning experience and I was proud to be apart of it.

What has been your biggest challenge as an artist?

I’m not sure how to answer that really, but I think getting through school was probably the hardest thing I’ve done.

What new projects are you working on now or looking forward to tackling soon?

Well, we just finished Arkham Knight and will be moving on to something new. So, that’s exciting! Also, working on finished The Dinosaur Lords trilogy, so will be starting that soon. Besides that, I’m trying to work on my own book project. Hopefully, will find time for that.