The Boskone Guest Interviews continue with our Special Guests Cathy & Arnie Fenner. We are looking forward to having the Fenners with us this year and are excited to share their interview with you.

Bio: In 1993, Cathy and Arnie combined both their personal and professional interests in the fantastic arts to form Spectrum: The Best in Contemporary Fantastic Art—but that has not been the limit of their celebration of the field. They have written, designed, and edited a series of titles devoted to the works of Frank Frazetta, Jeffrey Jones, Jon Foster, Robert E. McGinnis, John Jude Palencar, Dave Stevens, and many others that have been published by Underwood Books. The Fenners have also co-curated (with Irene Gallo and Gregory Manchess) two Spectrum exhibits at the Museum of American Illustration in New York City and have sponsored numerous student scholarships for aspiring artists. Together they’ve received ten Locus Awards and been nominated for the Hugo Award. Cathy and Arnie are constantly thinking of ways to expand the public’s awareness of and appreciation for the fantastic arts and the people who create it; they’re currently working on a new book about the history of the field. In addition, they are the head organizers of the annual event, Spectrum Fantastic Art Live. (from the Spectrum website.)

For people who are unfamiliar with Spectrum, how would you describe it? What inspired you to start Spectrum?

Spectrum is an annual competition for “the best in contemporary fantastic art” that began in 1993. Modeled after similar competitions for the illustration field, artists, art directors, and publishers submit work for consideration. Entries are divided into eight categories—Advertising, Book, Comics, Concept Art, Editorial, Institutional, and Unpublished—and a jury of their peers selects what they consider “the best” for inclusion in the full color Spectrum book. The jury also presents a Gold and a Silver Award in each category for art they consider exceptional. The Spectrum annual has become a valuable resource for art directors and collectors looking for talent and also serves as a visual history book for the F&SF field. 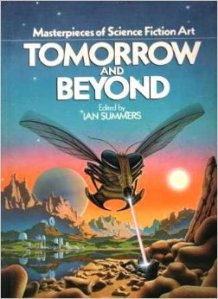 The two prime inspirations for Spectrum were the 1978 art book Tomorrow and Beyond: Masterpieces of Science Fiction Art edited by Ian Summers, and the Science Fiction Exhibition at the Museum of American Illustration co-curated by Wayne Douglas Barlowe and Michael R. Whelan in 1984. Both highlighted the depth and diversity of the Fantastic Art community, but were limited to one book and one show: we believed that there was enough interest to sustain something annually and, fortunately we were right.

But another inspiration was the desire to help promote the creators and this type of art and, hopefully, grow the awareness and appreciation for it. Until Spectrum, artists were often working in anonymity and genre art was often overlooked (if not derided) in other competitions. It tended to be ignored in both the illustration and gallery markets as a whole: not anymore. Spectrum helped provide a rallying spot—a community—in which the artists could receive recognition and their voices could be heard.

What has been the most satisfying achievement, moment, or memory in in your career?

That’s a difficult question! Overall, it would be finally taking the plunge and starting Spectrum—after too many years of talking about it—and having it embraced and supported by the artists. For something more specific, it’s probably the night we hosted the first live Spectrum awards ceremony in 2012. Up until then, the jury awards were announced and mailed to the various recipients without much fanfare, but when we sponsored the Spectrum Fantastic Art Live convention we were able to present them at a gala event with all of the glitz we’ve always felt the art community deserved. We rented a historic theater, featured live performances by Android Jones and Quixotic Fusion, and put the presenters and honorees on a gigantic stage with their art projected onto a 30 foot screen in front of an audience of their friends, families, and peers. It was the artists’ time in the spotlight and was, as they say, a night to remember.

If you could work with any artist (alive or dead) on an exhibit of your choice, who would you choose? Why that person?

Wow! That’s another hard one: there are so many. Maybe Howard Pyle, widely considered “the father of American illustration,” simply because he was so influential, as both an artist and educator, when it comes to narrative art. Maybe Rose O’Neill because she was a pathfinder for many women illustrators today and by all accounts incredibly eccentric (which would make working with her interesting). And it would be nice to organize a comprehensive show devoted to the work of Leo and Diane Dillon; their contribution to our field is under appreciated and people would be surprised at both the variety and the quantity of their art. Plus, it would be fun to wrestle with Harlan Ellison—a close friend of many years—to persuade him to loan some of the major Dillon paintings in his collection for a show.

Diversity in SF/F is a very hot topic right now. While we’re seeing more diversity in fiction, is there equal attention being paid to diversity in art? Is there anyone who stands out as a rising star?

The arts community is more diverse than ever and continues to expand. Which is understandable, really. Race, gender, religion, ethnicity, or location don’t matter when it comes to being an artist; having an imagination, skills, and the driving passion to succeed is all that’s necessary. New rising stars seem to emerge every year, each special for their own unique reasons. Karla Ortiz, Jeffrey Alan Love, and Cynthia Sheppard are just three of a veritable army of young artists who come to mind that we’re sure will become icons in the coming years.

What projects are you working on now or looking forward to in the future?

We’re working on a definitive collection of Virgil Finlay’s art for Underwood Books as well as gathering material for Spectrum Paradigm, a sort of who’s-who and what’s-what for the F&SF art field. We’ve also got plans for an art magazine despite all the pitfalls and challenges that face the print format in the digital age—but if vinyl can make a comeback and find a viable audience, there’s no reason why we can’t, too. And we’ve put our heads together with John Fleskes, our successor as Spectrum Director, in planning the fifth Spectrum Fantastic Art Live convention.