We are pleased to announce that Boskone has joined with the Boston Science Fiction Film Festival (BSFFF) and Women in Film and Video of New England (WIFVNE) to bring filmmaker Arwen Curry to Boston for two special events.

Worlds of Ursula K. Le Guin by producer/director Arwen Curry is the first feature length documentary about the life and legacy of science fiction icon Ursula K. Le Guin. Though primarily funded by a grant from the National Endowment for the Humanities, California Humanities, and the Berkeley Film Foundation, Arwen also turned to Kickstarter to raise the additional funding from nearly 3,200 backers to complete the project.

Watch the Boston Premier of Worlds of Ursula K. LeGuin with Director Q&A
Thursday, February 14 at 7:00 pm
Hosted by the Boskone Science Fiction Film Festival (BSFFF)
Somerville Theatre
55 Davids Square
Somerville, MA 02144
BSFFF ticket needed to attend viewing at the Somerville Theater. (Buy a Film Festival tickets here. You can use the code BoskoneSF44 for a 20% discount when purchasing a festival pass online (which expires 2/11) or you can purchase a single ticket for the documentary without a discount. For additional details, please visit the BSFFF site.) 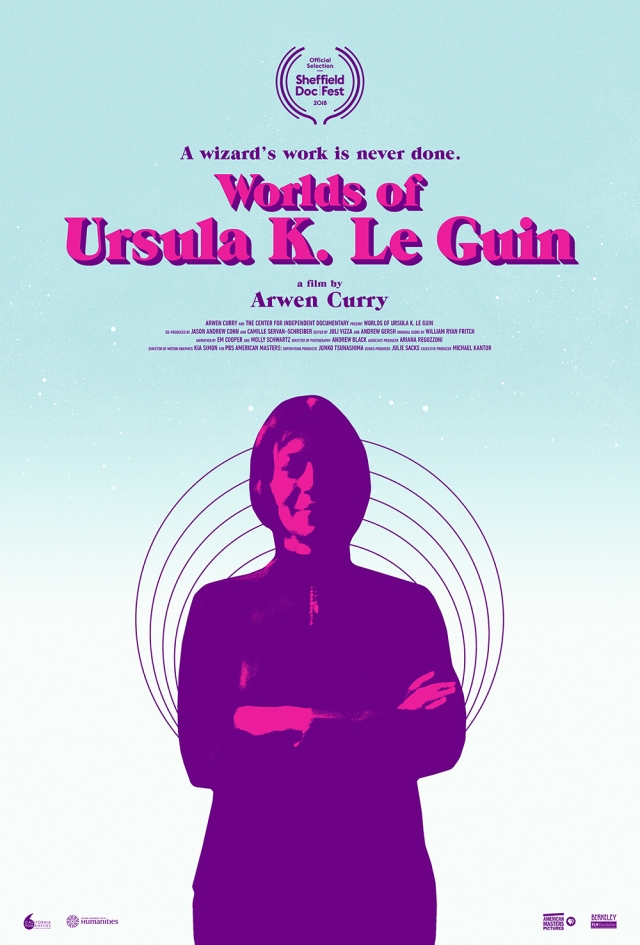 From the Worlds of Ursula K. Le Guin website:

“Worlds of Ursula K. Le Guin is a feature documentary exploring the remarkable life and legacy of the late feminist author Ursula K. Le Guin. Best known for groundbreaking science fiction and fantasy works such as A Wizard of Earthsea, The Left Hand of Darkness, and The Dispossessed, Le Guin defiantly held her ground on the margin of “respectable” literature until the sheer excellence of her work, at long last, forced the mainstream to embrace fantastic literature. Her fascinating story has never before been captured on film.

“Produced with Le Guin’s participation over the course of a decade, Worlds of Ursula K. Le Guin is a journey through the writer’s career and her worlds, both real and fantastic. Viewers will join the writer on an intimate journey of self-discovery as she comes into her own as a major feminist author, opening new doors for the imagination and inspiring generations of women and other marginalized writers along the way. The film features stunning animation and reflections by literary luminaries including Margaret Atwood, Neil Gaiman, David Mitchell, Michael Chabon, and more.”

For more information about the project please visit https://worldsofukl.com/.