With snow in this week’s forecast, what better way to prepare for Boskone by relaxing with our latest set of mini interviews!

Dana Cameron writes across many genres, but mostly crime fiction and urban fantasy in every possible form. Dana’s work has won multiple Anthony, Agatha, and Macavity Awards, and has been nominated for the Edgar Award. Her six Emma Fielding archaeology mysteries were optioned by Muse Entertainment, and the first, Site Unseen, was made into a movie for the Hallmark Movies & Mysteries Channel. Dana will be one of the Writer Guests of Honor at Necon this July, and when she’s not traveling or visiting museums, she’s usually yelling at the TV about historical inaccuracies. Visit her website, find her on Facebook or follow her on Twitter @danacmrn.

There are a number of conventions that you could attend. What is it about Boskone that makes you want to attend this convention?

Boskone is local for me, but more importantly, it covers a wide range of genres (from mystery to science fiction and fantasy to horror), and topics (panels on writing, world-building, etc.). It’s so well organized, and the Boskone folks work really hard to make an interesting convention set in a comfortable environment.

I’m going to say Star Wars. It wasn’t my introduction to science fiction, but it was the first science fiction movie experience that blew my impressionable young mind. I couldn’t stop talking about it for months after, much to the dismay of all around me. It was also the first time I found novelizations of a ‘verse, starting with the movie novelization by “George Lucas” (really Alan Dean foster). I was totally unsubtle when I saw a kid reading A Splinter of the Mind’s Eye (Alan Dean Foster) in science class: I all but grabbed the book out of his hand while yelling “where did you get that?” Slick, that. It was also the first time realized that I was part of a fan community.

This is tough–I’m proud of all of my “firsts” (mystery novel, UF novel, short story, etc.), but for me it’s “Femme Sole,” which appeared in BOSTON NOIR (ed. Dennis Lehane). It was the first time I really understood about how to make my emotions work for me as I was writing the story: I had a very short time to write it and a lot was on the line, at least in my mind. I was taking a chance on writing 18th-century noir and I got so caught up in my own nerves about writing this story that it wasn’t for some time after that I realized my protagonist, Anna Hoyt, was…let’s just say, she isn’t entirely a well person.

When was the last time you dressed up for Halloween? What costume did you wear?

I try to do something every year for when I dole out candy. The trick, for me, is to find a costume that won’t freak out the little ones, but will be interesting enough to older kids and adults. A vampire bite tattoo on my neck with an apron and a “Merlotte’s Bar and Grill” shirt; Tank Girl was a lot of fun; my academic robes, a wand, and my Hogwarts mug; a long-sleeved shirt with werewolf arms and claws. This year, I dressed up all black, added some lipstick–basically what I’d wear for a night out–and then put on some horns for your basic demon. Some kids took a beat to notice the horns, and asked what they were; I pretended I had no idea how they got there. The kids got all wide-eyed and then we all laughed like hell.

I’m working on a couple of short stories, both horror and speculative fiction. I’m excited about this because I have some very interesting images I’d like to be able to use–and it’s challenging (like most projects) because I need to remember that the plot, the theme, and the atmosphere don’t necessarily all happen at once in the writing process. Get the story, then figure out the theme, then work the atmosphere in. 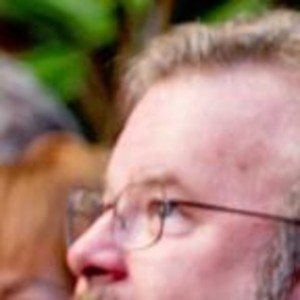 Richard Shealy is a freelance copyeditor specializing in science fiction and fantasy work from short stories to novels but has worked in broader genre as well. He works with both traditional publishing houses and self-publishing authors. Visit his website, find him on Facebook or follow him on Twitter @SFFCopyediting.

What is your favorite Boskone memory or experience?

Sitting in the lobby bar with friends off and on at the same table for over twelve hours (with breaks for panels and such; there was always going to be someone still at the table when the break-taker returned). Friends, acquaintances, colleagues and new people joined and left all through that time. This is the core of the con experience: being able to interact in a relaxed way with other con-goers for however long one wishes.

Good Omens. The book was a constant joy of discovery.

(As I’m a copyeditor, this technically doesn’t apply to me, but I’m taking it anyway!) I have had so many excellent, joyous, moving, etc. experiences throughout my career, but I suppose the one that stands out the most was copyediting Seanan McGuire’s Dusk or Dark or Dawn or Day. I was genuinely moved to tears at more than one point. NB: I am constantly finding things to love about projects at hand, so this is a far harder question than it might be otherwise. I am regularly finding myself muttering at characters, cheering a victory and so on!

An indie author’s novel. It’s still too early in the project to answer those questions in any specific way, but I’ll give the answer I would give about any of my projects: discerning this particular author’s voice and determining how best to support it. 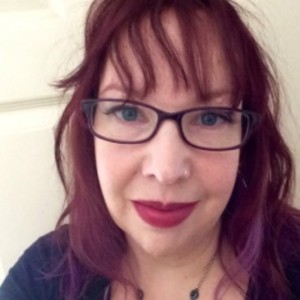 Suzanne Reynolds-Alpert writes science fiction, horror, dark fantasy, and the occasional poem. Her short fiction had been published in the anthologies Killing It Softly and The Deep Dark Woods. Her poetry has appeared in places such as the anthology Wicked Witches, Tales of the Zombie War, The Wayfarer: A Journal of Contemplative Literature and Eternal Haunted Summer. Suzanne is a professional editor, holds down a job in marketing, and has degrees in Communication and Sociology. Visit her website, find her on Facebook or follow her on Twitter @SuzsMuses.

There are a number of conventions that you could attend. What is it about Boskone that makes you want to attend this convention?

I attended my first Boskone years ago, as a day-only attendee. I was impressed with the programming, guests, and the serious focus on genre topics. I’ve been looking forward to the opportunity to attend as a program participant.

The collective experience of reading Animal Farm, 1984, and Brave New World as a pre-adolescent had a profound effect on me. My reaction to these was, “Oh my God, humans will manipulate the truth and facts in order to control other humans?” I literally felt my mind being blown, which was disturbing and exhilarating all at the same time. Thus began my love affair with dystopias, which continues to this day.

Bonus answer: as an adult, reading Octavia Butler’s Parable of the Sower, the first book of hers I’d read, gave me an adult-version mind-blowing similar to the above. She went on to become my favorite author, and I sobbed the day she died.

I’m simultaneously, slowly, working on several projects. I wrote very little the past year, due to a combination of health issues, a new job, and Imposter Syndrome. I’ve had a horror, young adult novella in progress for over a year. This has been challenging for me, because I don’t “naturally” write for younger audiences.

I also have a novelette I’ve been writing off and on for over three years. This one is also horror, has a lot of body horror involved. As it’s currently written, there is an attempted rape scene, and I’m rethinking this because of the past several years’ pushback against using rape capriciously as a plot device. I’m trying to decide if there are other ways to get one of my themes across without this scene. So this story has been challenging as well.

Dr. SETI is the stage name of the blatant exhibitionist who inhabits the body of noted author and educator Dr. H. Paul Shuch (rhymes with luck). A cross between Tom Lehrer and Carl Sagan, it is said that Dr. SETI sings like Sagan and lectures like Lehrer. Armed with a laptop computer and an acoustical guitar, Dr. SETI travels the world making the search for life in space accessible to audiences as diverse as humanity itself. At college campuses, science centers, public lecture halls, and on television and radio, Dr. SETI’s unique mix of science and song seeks to educate as well as entertain. He compels the listener to contemplate a fundamental question, which has haunted humankind since first we realized that the points of light in the night sky are other suns: Are We Alone? Visit his website or find him on Facebook.

What is your favorite Boskone memory or experience?

BlizzardCon 2015! My wife and I (along with hundreds of our best friends) were snowed in there for a couple of extra days, over Valentines Day weekend. It was like a second honeymoon.

Although I’m probably better known for my science filks, I think my anti-war song “And The Band Played The Star Spangled Banner” is probably my best work. Inspired by Eric Bogle’s “Galipoli” (aka “And The Band Played Waltzing Matilda”), it draws on my experiences during the Vietnam War and afterward – and took me 29 years to complete.

In the realm of “truth is stranger than fiction,” what experience from your past would people never believe if it were written into a story?

Experiencing Arthur Clarke’s incredible hospitality at 25 Barnes Place, Colombo, in early 2000. His warmth, generosity, and humility will never be forgotten. I wrote him a song for the occasion (“Extraterrestrial Relays”), and after I had sung it for him and his brother Fred, Arthur called in all his household staff and bade me sing it again. Afterward, I gifted him the original draft (autographed to “Arthur Charles Clarke, the world’s second-greatest communications engineer”), which he immediately framed and hung up on the wall of his Ego Chamber.